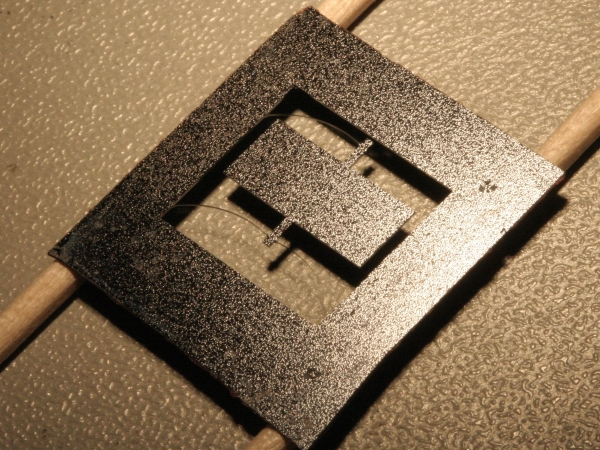 Members of the Institute for Gravitational Research (IGR) and the School on Engineering have published an article in Nature titled: “Measurement of the Earth Tides with a MEMS Gravimeter”. The Earth tides are the elastic deformation of the Earth caused by the changing phase of the Sun and the Moon, and the Glasgow microelectromechanical system – or MEMS - is the first such device to measure this phenomenon (see figure 1). This measurement was possible because the device has an incredible stability compared to existing MEMS accelerometers or seismometers. Consequently it is the first MEMS accelerometer that can be classed as a gravimeter. The MEMS device is etched from a single piece of silicon and consists of a central proof mass suspended from three arched anti-springs (see figure 1). The proof mass moves in response to changing gravitational acceleration and the motion is monitored using a simple optical shadow sensor (see figure 2). The combination of the soft springs, the heavy proof mass, and the accuracy of the motion sensor allows the device to measure changes in little g of 40 parts per billion in an integration time of 1 second (40 μGal/√Hz).

The work is the result of a collaboration between the Institute for Gravitational Research and the Electronic and Nanoscale group in the School of Engineering. The collaboration has developed over the last 3 years, initially starting with a Glasgow sensors studentship and Royal Society Paul Instrument funding. The research is now a main theme of the QuantIC quantum technology hub in quantum enhanced imaging, and has gained significant buy-in from industrial partners. The devices were fabricated in the James Watt Nanofabrication Centre (JWNC), but the measurements themselves were conducted from a seismically quiet lab at the bottom of the Kelvin Building. The combination of expertise in developing/testing precision opto-mechanical devices (from the IGR), combined with one of the best cleanrooms/processing facilities in Europe (JWNC) has enabled this new and novel technology.

This work is a real transformative step in the field of gravimetry. There are many potential industrial, and humanitarian applications for gravimeters, but their cost and bulkiness have made them impractical in many situations. Showing the long term stability and sensitivity required with a MEMS device opens up the possibility of making gravity measurement a much more realistic proposition for all kinds of industries. This is particularly the case in volcanology, where networks of MEMS gravimeters could be placed around volcanoes to monitor the intrusion of magma that occurs before eruptions, acting as an early-warning system. Other applications are in the field of geophysical prospecting, environmental monitoring and defence & security.
News