Modern Nuclear Physics aims at extending our understanding of the atomic nucleus chiefly in two directions: towards smaller distances by investigating the structure of the constituents of nuclei, nucleons and mesons (more generally, hadrons), and at larger distance scales by exploring the very limits of nuclear existence. Major breakthroughs are expected over the next decade when the large-scale facilities that are being built in Europe, Japan and North America become operational. The world-class research of the Scottish Nuclear Physics groups at the Universities of Edinburgh, Glasgow and UWS spans a wide range of topics from nucleon structure and spectroscopy to nuclear astrophysics.

Plasma Physics at the University of Strathclyde has research activities in most international areas, including magnetically-confined plasmas, laser-plasmas, space plasmas, relativistic non-neutral plasmas, technological plasmas and laboratory simulations of space plasma, with links to groups at the Universities of Glasgow, Heriot-Watt and St Andrews. The Strathclyde and UWS groups have formed a strong collaboration in laser-driven plasma nuclear physics. They have been the first to create medical isotopes, induce heavy ion fission and investigate transmutation of nuclear waste and neutron spallation using high intensity laser beams.

The nuclear and plasma physics groups in SUPA comprise circa 100 researchers from academic staff to PhD students. There are strong links to other themes in SUPA: Particle Physics, Astronomy and Space Physics and Photonics.

Areas of strength within the Nuclear and Plasma Physics theme: 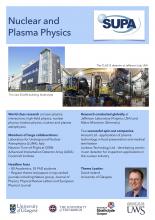 Here is a selection of those highlights for this theme from these events: