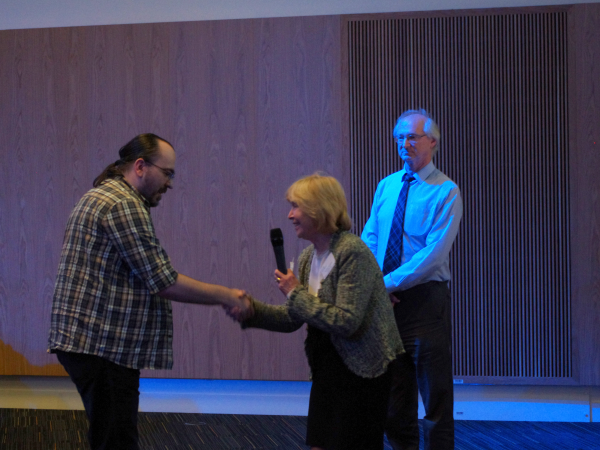 A new feature of the 2016 Gathering was a Student Poster Prize Competition. Each of the eight SUPA partner universities nominated a student to present a poster. The prize, sponsored by Kaiam Corporation (Livingston), was judged by a panel comprising three members of the SUPA International Advisory Committee, Professors Ruth Gregory (U.Durham), Anneila Sargent (CalTech) and Malcom Longair (U.Cambridge). All posters presented were of very high quality and the panel were challenged to choose a winner.

Andrew MacKeller from the Experimental Quantum Optics and Photonics Group of the University of Strathclyde was declared the winner of the 2016 SUPA Student Poster Competition by Professor Sargent with his poster on “Phase-contrast interferometry: Single-shot, phase insensitive readout of an atom interferometer”. In presenting the Prize to Andrew, Professor Sargent commended the poster for its balance between fundamental physics and state-of-the-art technology with a clarity of presentation that leads the reader through the research and its outcomes. Andrew explains a little more about his research and background:
“My research is centred on the use of atom interferometry for precision metrology. We use laser pulses to coherently control clouds of ultra-cold atoms, essentially building optics for matter-waves. Interferometers like these can be used in an `applied’ sense, such as gravitational gradiometry or magnetometry, but can also be used as probes of fundamental physics. Much of my work here has been in the precision measurement of the fine structure constant, which is a key parameter in the most stringent tests of Quantum Electrodynamics.
I was originally part-trained as an Architect here at Strathclyde, then left to spend five years working as sound mixer in a film crew. After a chance encounter with the Head of Strathclyde’s Physics Department at a public science lecture seven years ago, I found myself returning to the university as a mature student starting an undergraduate physics degree. I am now at imminent risk of writing my thesis and moving on.
As someone who spent much of my early adult life kicking myself for not taking up Physics immediately out of school, I feel incredibly fortunate to have been given a second chance and the privilege to work in such an exciting line of work with such ridiculously skilled people.”
Posters were presented by
Gloria Cecchini  University of Aberdeen
Ivo Leite  University of Dundee
Carlo Bruno University of Edinburgh
Natasha Jeffrey University of Glasgow
David Carvalho Heriot-Watt University
Andrew Mackellar University of Strathclyde
Jonathan Nylk University of St Andrews
Hin on Chu University of the West of Scotland
News