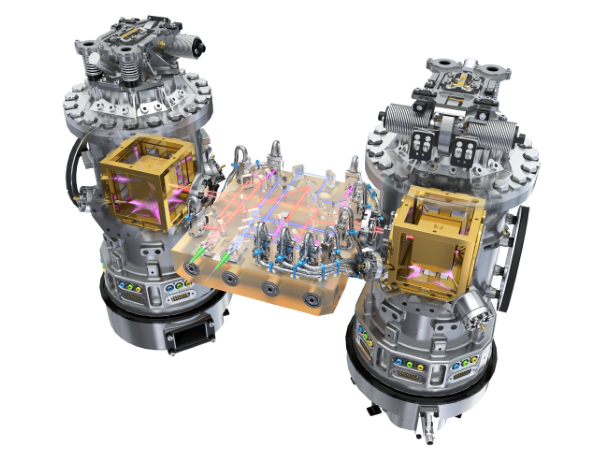 In what has been an exceptional few months for the field of gravitational wave science, with the first direct detection having been recently announced, [link ‘first direct detection’ to newsletter article on GW detection] the European Space Agency (ESA) has announced the first results from the LISA Pathfinder mission – and they exceed all expectation.

For many years the international gravitational wave community has targeted having ground and space based observatories.  The ground-based network is now operating with mind-boggling sensitivity, and continually improving, such that we have now made the first direct detections of gravitational waves.  But we are only just scratching the surface of the scientific rewards to be harvested from decades of research to date.

Ground-based observatories are sensitive to signals from astrophysical sources at frequencies above ~1 Hz, such as the tens of stellar mass black hole collisions we have detected to date.  To observe the richly populated lower frequency part of the gravitational wave spectrum, we need to place a detector in the gravitationally quiet environs of space.  Here, we will be able to detect events such as super-massive black hole mergers – systems involving millions, if not billions, of stellar masses.

Building an observatory in space comes with a new set of challenges – a spaceborne observatory will have to monitor free-floating test mass positions with picometre accuracy, with the test masses separated by millions of kilometres.  LISA Pathfinder has been flown to demonstrate the key technologies required.  Here two test masses – gold-platinum cubes with 46 mm long sides – are housed in a single spacecraft at a separation of 38 cm and all spurious forces acting on the test masses are reduced as far as possible.  The test masses are then in true freefall and are being influenced only by gravity.

The sensing of this near-perfect freefall is performed by a set of interferometers arranged on an optical bench between the test-masses.  Measurement accuracies at the 10 picometre level have now been demonstrated for frequencies in the milliHertz range.  The optical bench is the result of a decade of development and manufacturing work at the University of Glasgow’s Institute for Gravitational Research.

Dr Harry Ward, Reader in Physics and Astronomy and a member of the Institute for Gravitational Research at the University of Glasgow, described the results as “a spectacular success” which effectively gave the green light to embarking on the next stage – “to fly a spaceborne gravitational wave detector”.

“We want to detect super-massive black hole coalescences when galaxies collide but to do that we had first to prove you can make the super-sensitive measurements – and we have now done exactly that.”

“The measurements have exceeded our most optimistic expectations,” said Paul McNamara, former PhD student of Harry Ward and now LISA Pathfinder Project Scientist.  “We reached the level of precision originally required for LISA Pathfinder within the first day, and so we spent the following weeks improving the results by a factor of five.”

The first two months of data show that, in the frequency range between 60 mHz and 1 Hz, LISA Pathfinder's precision is only limited by the sensing noise of the laser measurement system used to monitor the position and orientation of the cubes.

“The performance of the laser instrument has already surpassed the level of precision required by a future gravitational-wave observatory by a factor of more than 100,” said Martin Hewitson, another former PhD student of Harry Ward and now LISA Pathfinder Senior Scientist at the Max Planck Institute for Gravitational Physics and Leibniz Universität Hannover, Germany.

At lower frequencies of 1–60 mHz, control over the cubes is limited by gas molecules bouncing off them – a small number remain in the surrounding vacuum. This effect was seen reducing as more molecules were vented into space, and is expected to improve in the following months.

The results, published in Physical Review Letters, demonstrate that LISA Pathfinder has proven the key technologies and paved the way for such an observatory, as the third ‘Large-class’ (L3) mission in ESA’s Cosmic Vision programme.

LISA Pathfinder is a European Space Agency project, with contributions from 14 different European countries and from the USA. The spacecraft has been developed and built in Stevenage by Airbus Defence and Space. The UK payload items have been funded by the UK Space Agency with major contributions coming from Glasgow University, Imperial College, Birmingham University and the Mullard Space Science Laboratory.