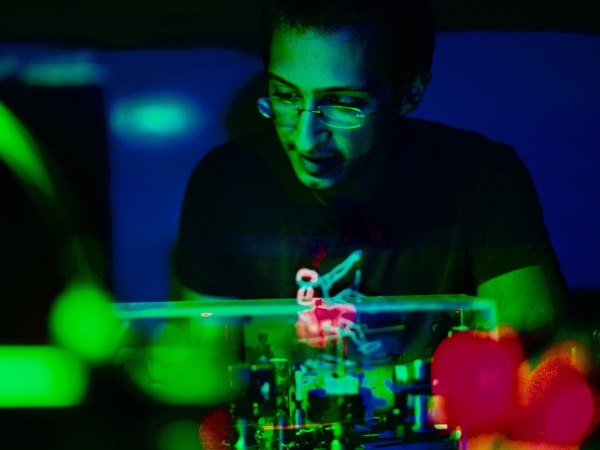 In 2015 the universe was officially proven to be weird. After many decades of research, a series of experiments showed that distant, entangled objects can seemingly interact with each other through what Albert Einstein famously dismissed as “Spooky action at a distance”.

A new experiment by an international team led by Heriot-Watt researcher Dr Alessandro Fedrizzi has now found that the universe is even weirder than that: entangled objects do not cause each other to behave the way they do.

Distinguishing cause from effect comes naturally to us. PhD student Martin Ringbauer from the University of Queensland explains, “Picture yourself in a room where someone is flicking a light switch. Intuition and experience lets you establish a simple causal model: the switch causes the lights to turn on and off. In this case, correlation implies causation.”

“If we could entangle two lights, you would see them turn on and off at random, regardless of how far apart they are, with no obvious switch and in perfect lockstep. Einstein’s preferred explanation of this mysterious effect was that there must be a hidden light switch which acts as a common cause for our entangled lights.”

Einstein’s world view was finally proven wrong last year by groups in Vienna, Delft and Boulder. However, we’re still searching for an answer how entanglement really works and one popular explanation was that entangled objects could cause each other perhaps instantaneously, ignoring the universal speed-of-light limit.

In a new experiment, Fedrizzi and colleagues found that this claim is also wrong. They set up individual photons to act like entangled light bulbs and then subjected them to two tests.

In the first, they essentially flicked the light switch themselves to test their causal hypothesis. In the second, they tested a new inequality by theory collaborator Rafael Chaves, which shows that nonlocal causality can in general not explain quantum entanglement.

“We have spent decades to prove Einstein wrong and can now start looking into extended models of his ‘spooky’ action”, says Dr Fedrizzi. “What we found is yet another mechanism that doesn’t explain this quintessential feature of entanglement. Our results drastically narrow down the remaining explanations.”

The techniques the team developed also have practical applications such as in cyber-security. They can for example be used to increase the level of trust we have into quantum encryption devices.

hw.ac.uk | T: +44 131 451 3649
www.mostlyquantum.org
Notes:
Heriot-Watt is a specialist university, globally minded and calibrated to the needs of society. A leading technological and business university, renowned for innovation in business, engineering, design and the physical, social and life sciences, Heriot-Watt defines its presence on the international stage in areas of world importance and value.
Our communities of scholars come from across the world and are leaders in ideas and solutions; delivering innovation and educational excellence, the University is ranked in the top 10 for Research Impact in the UK.
With roots in Scotland and a truly international reach, Heriot-Watt is a leader in transnational education and a powerful driver and engine of the economy, transforming people and the world.
News
Quantum correlation
Heriot-Watt