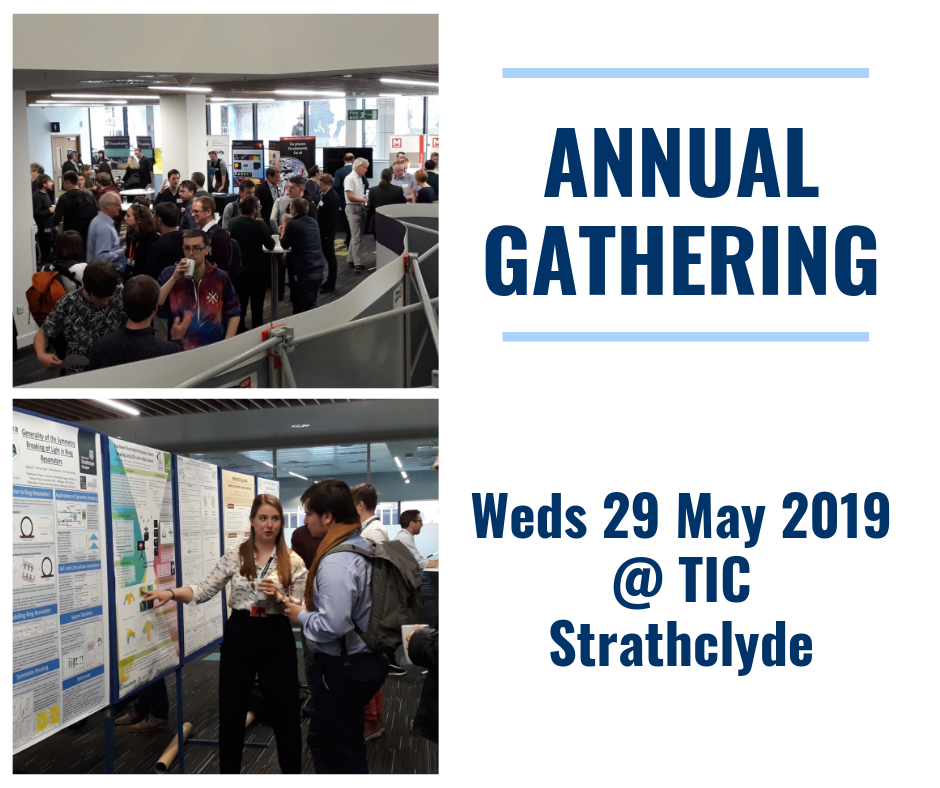 The SUPA Gathering has built a reputation over the past 4 years as a showcase and celebration of world class physics research in Scotland. As well as talks highlighting some of the latest advances in physics research across all of the SUPA Themes, the programme offers examples of career opportunities for early career researchers, poster competition, and exhibition. 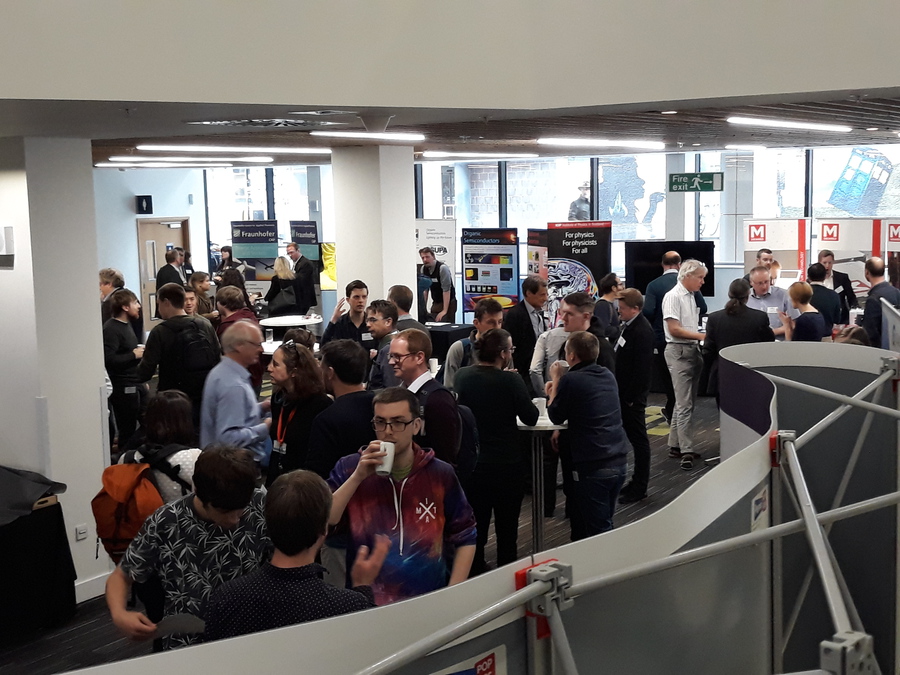 The 2019 Annual Gathering was very well attended, with 300 people from across SUPA universities and partners coming to the Technology & Innovation Centre at the University of Strathclyde.

This year's exhibition focussed on the impact of physics from both industry and academia, with over 20 exhibitors eager to talk to participants about the impact of their research and products. 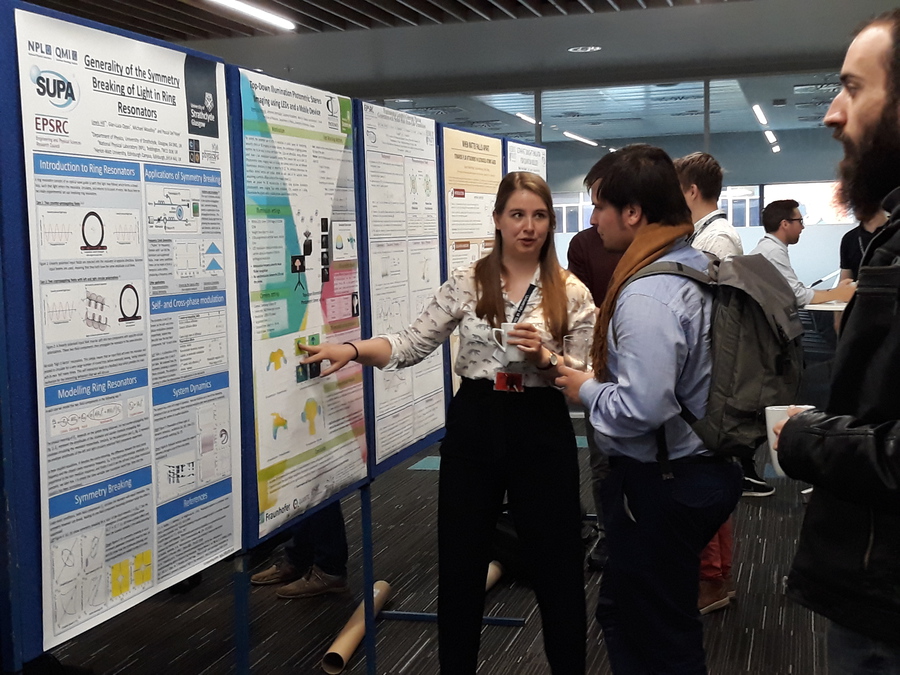 The poster competition for PhD students attracted 20 posters from those at all stages of their doctorate aiming to communicate the plans for, or results of their research. For the first time, the students were given the opportunity to get feedback on their poster design prior to the conference. One such student went on the win the overall poster prize: Congratulations to Berke Vow Ricketti, from Heriot-Watt University! Berke's poster entitled 'Ultrafast sunlight emulator for quantum biology" was deemed by the judges to have communicated the project in an eye-catching and accessible to non-specialists way.

In the main auditorium, Catherine Heymans (University of Edinburgh) opened the day with her engaging research highlight talk, asking the audience their views on what is causing the accelerated expansion of the universe, with some interesting results! Early career researchers gave highlights on their research and their career journeys, giving insight to the students wanting to follow in their footsteps. Six PhD students gave excellent short talks on their research. An overarching outcome of the talks was just how multi-disciplinary research in physics is.

Our keynote talk was from Ian Walmsley, of University of Oxford and Imperial College London. Ian took us through the background to quantum mechanics, quantum computing, how it will impact on all of us, and how we can use optics to invent new technologies.

The full programme can be viewed online here. Information on the exhibitors and posters is also available. 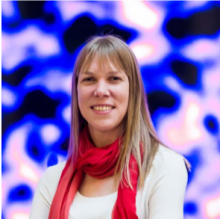 Catherine Heymans is Professor of Astrophysics at the University of Edinburgh, Director of the GCCL Institute in Germany and a European Research Council Fellow. She specialises in observing the dark side of our Universe using deep sky observations to test whether we need to go beyond Einstein with our current theory of gravity.  Catherine has co-authored over 150 articles in scientific journals and written the popular science book “The Dark Universe”.  Catherine shares her research with the public, both virtually through a Massive Open Online Course 'AstroTech' which has attracted over 40,000 students worldwide, and in person through a wide range of events including Art, Music and Science Festivals. In recognition of her work she was awarded the 2017 Darwin Lectureship from the Royal Astronomical Society and the 2018 Max-Planck Humboldt Research Award. 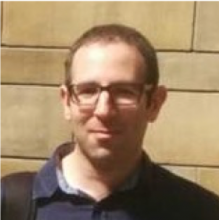 Adam Noble is a Research Fellow in laser-plasma interactions at the University of Strathclyde. Before coming to Scotland in 2010, he completed his PhD in Mathematical Physics at Lancaster University, with a thesis combining aspects of electrodynamics, gravity, particle physics, and geometry. While at Lancaster, his research group morphed from a general relativity group to an accelerator physics one, and he has applied this interdisciplinary outlook throughout his subsequent career. Through his involvement with the Cockcroft Institute, Adam became interested in laser wakefield acceleration, which brought him to the ALPHA-X project at Strathclyde. He now works primarily on theoretical aspects of the interactions of matter with ultra-high intensity electromagnetic fields, and how they can be probed at upcoming laser facilities. 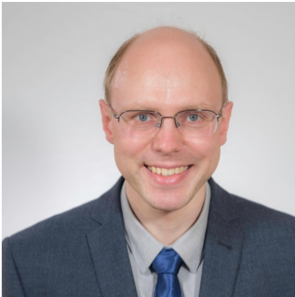 Johannes Herrnsdorf obtained the MSc in Physics from ETH Zürich and the PhD in Physics from the University of Strathclyde for his work on inorganic and organic semiconductor lasers. He then studied the modulation characteristics of GaN LEDs and was the leading researcher to apply such LEDs to structured illumination within the Glasgow ‘QuantIC’ Quantum Hub. In 2018, he won an EPSRC Innovation Fellowship at the University of Strathclyde to investigate how high-speed digital interfacing of LED and detector arrays can unlock new physical capability. 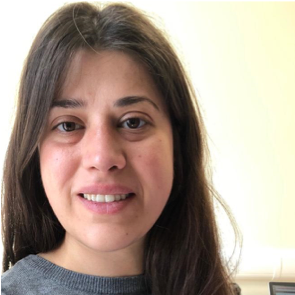 Serena Palazzo is a postdoc at the University of Edinburgh. She received her undergraduates and PhD degrees in particle physics at the University of Calabria (Cosenza, Italy). For her undergraduates degrees she has been mainly involved in the performance tests on New small wheels MicroMegas chambers for the Phase-1 upgrade program of the ATLAS muon spectrometer at CERN. In this area she developed both hardware and software skills. During the PhD she was mainly involved in precision measurements of top quark physics in the working group of the ATLAS collaboration. At the end of her PhD, she won a one-year INFN-CERN fellowship to spend an additional year at CERN to publish her PhD work. After her PhD she got a postdoctoral position, under a european network project, at the University of Edinburgh. At the University of Edinburgh, Serena has continued working in top quark physics measurements and she started working with machine learning techniques, using Generative adversial network approaches applied to the simulation of events at the LHC and to the simulation of the ATLAS detector response. In her research she is also involved in project with a company where she applies machine learning techniques to detect duplicate invoice transactions. 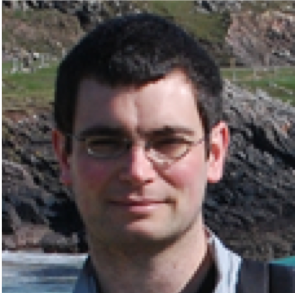 Iain is a Royal Society Research Fellow and proleptic lecturer on the Institute for Gravitational Research at the University of Glasgow. His research focuses on the development of ultra-low noise mirrors and optical coatings for gravitational wave detectors. He has particular interests in cryogenic measurements, mechanical loss spectroscopy, thin film coatings and optical absorption. Iain obtained his PhD at Glasgow in 2009, following which he was awarded an STFC Postdoctoral Fellowship, followed by a Royal Society University Research Fellowship in 2011. In 2012 Iain was appointed to a proleptic lectureship in Glasgow 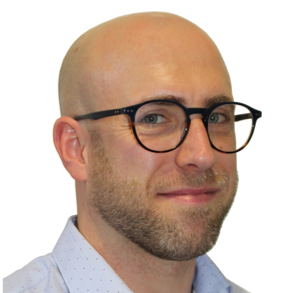 Trevor is a Lord Kelvin Adam Smith Research Fellow in the School of Physics and Astronomy at the University of Glasgow. He obtained his PhD in Material Science and held a one-year EPSRC Doctoral Prize fellowship at the University of Nottingham, focusing on the transmission electron microscopy (TEM) of magnetic metal oxide nanoparticles. Trevor then spent 4 years as a postdoc at Imperial College London, which included extended visits to world-renowned electron microscopy institutes in Denmark (1 year) and Germany (8 months), where he used advanced TEM methods to visualise magnetism in minerals. Trevor then took full advantage of the opportunity to expand his research to study magnetism of complex nanostructures for technological applications, using the world-leading TEM for magnetic imaging at the University of Glasgow. His current research is focussed on combining in situ TEM experiments with magnetic imaging to visualise directly dynamic magnetic processes in thin films and bi-magnetic nanostructures. 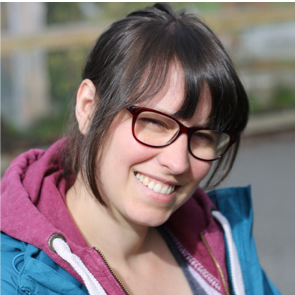 Jana is a passionate and enthusiastic interdisciplinary scientist. Ever since she can remember she has been fascinated by the diversity of life. With a PhD in molecular microbiology from the University of Strathclyde and a MSc in biotechnology from the University of Bonn, she is equipped to tackle questions about metabolic evolution and cellular physiology. Her first PostDoc has led her into bacterial genome manipulation and antibiotic discovery from soil bacteria. More recently she started working on a project with Gail McConnell to look for applications of a newly developed bioimaging technique: Standing Wave microscopy, where she is focusing on live cell imaging of the cytoskeleton. If she is not in the lab, Jana is either organising early career researchers events or championing researchers with family commitments. Jana is also part of the global Homeward Bound female leadership program to address our planet's biggest challenges. 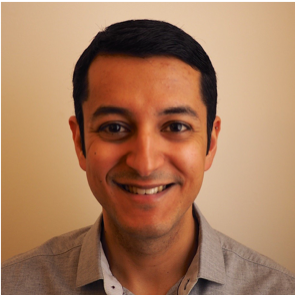 Mehul Malik is an Assistant Professor of Physics at Heriot-Watt University, Edinburgh, where he leads the Beyond Binary Quantum Information Laboratory (BBQ Lab). He currently holds an EPSRC Early Career Fellowship and leads a European QuantERA consortium studying quantum phenomena with complex media. His research interests include quantum information processing and communication, fundamental studies of entanglement, and complex scattering media. Prior to moving to the UK, Mehul held a Marie Curie Postdoctoral Fellowship in the group of Prof Anton Zeilinger at the University of Vienna, Austria. Mehul’s work includes the creation of the first three-particle entanglement in high dimensions, and the development of extremely efficient methods for measuring complex forms of quantum entanglement. Mehul was born in New Delhi, India and completed his PhD in 2013 with Prof Robert Boyd at the University of Rochester, New York. 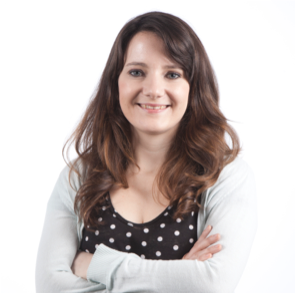 I studied physics at the University of Heidelberg, Germany and obtained my PhD from the Institute of Photonics, University of Strathclyde, Glasgow in 2012. I then joined the Biophotonics group at the European Laboratory for Nonlinear Spectroscopy (LENS) in Florence, Italy as a post doc in 2013 to implement confocal light-sheet microscopy for structural whole mouse brain imaging and then later functional calcium imaging in Zebrafish. From 2016 on, I was a researcher with the Italian National Institute of Optics, part of the Italian National Research Council where I worked on non-diffracting beams and cardiac optogenetics. Since September 2018, I am a lecturer at the University of Glasgow. I teach electrodynamics and electronics to first year Physics students and research cardiac imaging and optogenetics which is also the topic of my Marie Curie Fellowship starting September 2019. 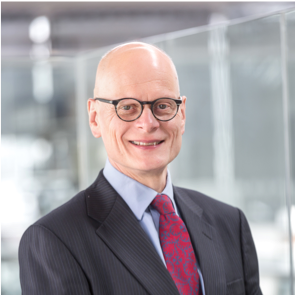 Ian Walmsley is Provost of Imperial College London, UK, and Chair in Experimental Physics. His research in optical science and technology ranges from ultrafast optics to quantum information science. Currently he is the Director of the Networked Quantum Information Technology Hub, the largest collaboration in the UK National Quantum Technologies Programme. He is a Fellow of the Royal Society, the Optical Society (OSA), the American Physical Society and the Institute of Physics.