Paul Soler, Professor in Experimental Particle Physics at the University of Glasgow, said in a statement: “This is the first time that a baryon has been conclusively observed containing two heavy charm quarks and is a new frontier in understanding the strong force that binds quarks together.” [Newsweek]

On the 6th of July 2017, Dr Patrick Spradlin, a SUPA physicist from the University of Glasgow, announced the discovery of a new baryon, called the Ξcc++, at the European Physical Society High Energy Physics (EPS-HEP) Conference held in Venice (Italy). The analysis was carried out by SUPA physicists working on the LHCb experiment at CERN. The findings are published in Physical Review Letters.

Baryons are strongly bound hadrons consisting of three valence quarks. Protons and neutrons contain combinations of up and down quarks and make up the overwhelming majority of the ordinary matter observed in the universe. The unique feature of the Ξcc++ baryon is that it contains two heavy charm quarks and an up quark, with a net charge that is double that of the proton.  This discovery is the first conclusive observation (with a significance well exceeding 12 standard deviations) of a new family of “doubly charming” baryons with two heavy charm quarks.  Quark configurations containing two heavy quarks had never been seen before. This unique system enables sensitive probes of the strong nuclear force, which is described by Quantum ChromoDynamics (QCD) within the Standard Model of Particle Physics. In a doubly heavy baryon, the two heavy quarks are almost static at the centre of the baryon, with the lighter quark orbiting around them. This is similar to the hydrogen atom, where the electron orbits around the nucleus due to the electromagnetic force. Further investigations into other doubly charmed baryons, such as those with the charm-charm-down or charm-charm-strange quark configurations will allow to study the strong force in a laboratory system that is similar to that of atoms. 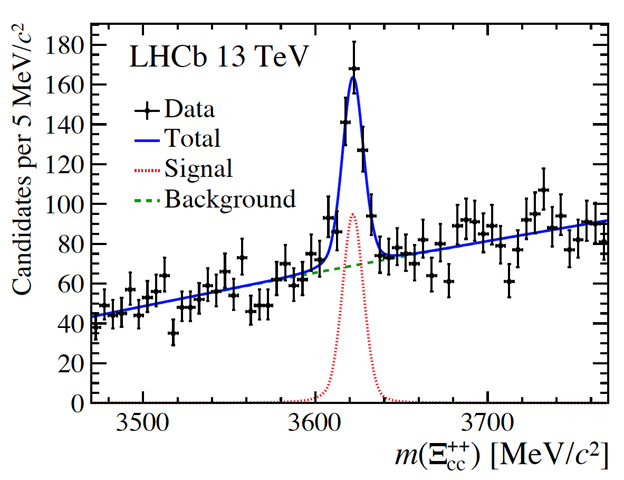 The discovery of the new state was observed from the Ξcc++ baryon decaying to a final state Λc+ K- π+ π+, where the Λc+  is another baryon with only one charm quark. An isolated narrow structure in the Λc+ K- π+ π+ mass spectrum, containing 313 events at a mass of around 3621 MeV/c2, was observed in LHC data recorded at 13 TeV and was confirmed in the 2012 data at 8 TeV. The observed Ξcc++ baryons live for a measurably long time before decaying, confirming that the baryon decays via the weak interaction. The measured mass agrees with recent theoretical predictions, including a prediction using the lattice QCD technique.

The experimental status of doubly charmed baryons has remained controversial since 2002, when the SELEX collaboration at Fermilab in the USA claimed the first observation of this class of particle. They observed a significant peak of about 16 events at a mass of 3519±1 MeV/c2 in the Λc+ K- π+  mass spectrum, which they identified as the closely related state Ξcc+ baryon.  However, the short lifetime and the very large production rate did not match theoretical expectations. SELEX confirmed their discovery in a second decay mode, but all subsequent searches in other experiments (such as FOCUS, BaBar, Belle) failed to find evidence for doubly-charmed baryons in this mass range. The mass difference of the Ξcc++ state observed by LHCb with respect to the Ξcc+ state claimed by SELEX is 103±2 MeV/c2, which seems irreconcilable for these states to be isospin partners (in which the up and down quarks are interchanged). This discovery does not yet solve the puzzle of the Ξcc+, but it is a crucial step to finally resolving our empirical understanding of the nature and properties of doubly heavy baryons.

The LHCb experiment is a collaboration of around 750 scientists from 69 different universities and laboratories in 16 countries, including around 40 academics, postdocs and PhD students from the Universities of Edinburgh and Glasgow.

Dr Patrick Spradlin, LHCb physicist from the University of Glasgow, who led the analysis and made the announcement at the EPS-HEP Conference in Venice, said that this discovery would “shed light on a longstanding puzzle and open an exciting new branch of investigation”.

Prof Paul Soler, also from the University of Glasgow, said that “this is the first time that a baryon containing two heavy charm quarks has been conclusively observed and is a new frontier in understanding the strong force that binds quarks together.”

Figure: Invariant mass distribution of the Λc+ K- π+ π+ candidates. Ξcc++ peak remains prominent in this subset of events with a significance of more than 12 standard deviations.