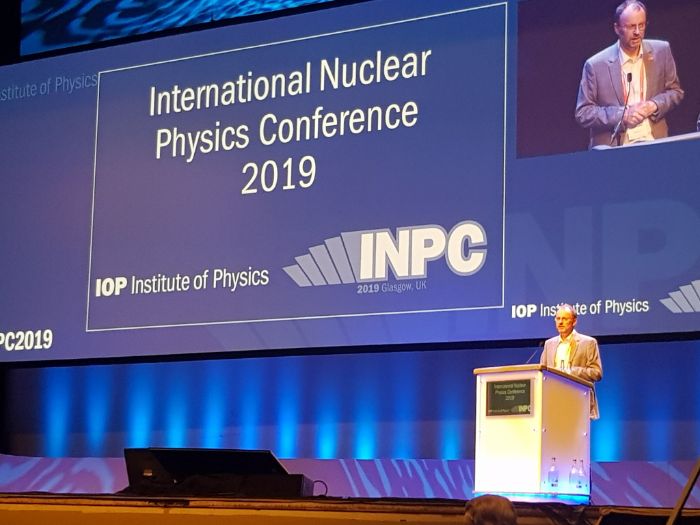 The 27th International Nuclear Physics Conference (INPC 2019) was held in Glasgow this summer (29 July to 2 August). Held every three years,
INPC is the biggest conference in the world for fundamental nuclear physics, and is overseen by the International Union of Pure and Applied
Physics (IUPAP). This was the first time it had been held in Scotland, with previous conferences having been in locations such as Adelaide, Florence and Vancouver.

Over 650 delegates from 32 countries were welcomed by Baillie John Kane, representing Glasgow's Lord Provost, and to Scotland by Ivan McKee MSP, representing the Scottish government. The programme covered the very latest work across the whole range of topic areas in Nuclear Physics, from the study of hadrons to the heaviest nuclei, and the role of nuclear physics in our understanding of the universe. The importance of applications of nuclear science was also highlighted. In addition to the SUPA-sponsored public lecture, an outreach programme was put together by teams from Glasgow and York, featuring amongst other things a chart of nuclides built from lego.

At the public lecture, SUPA CEO, Alan Miller introduced the speaker for the evening, Jim Al-Khalili. Jim spoke about Nuclear Physics and the Making of the Modern Periodic Table. The picture above shows Glasgow's David Ireland, the conference Chair and SUPA Research Theme Leader for Nuclear and Plasma Physics.

More information on the Conference can be found online.

Image used with permission from Claire Garland, Institute of Physics.